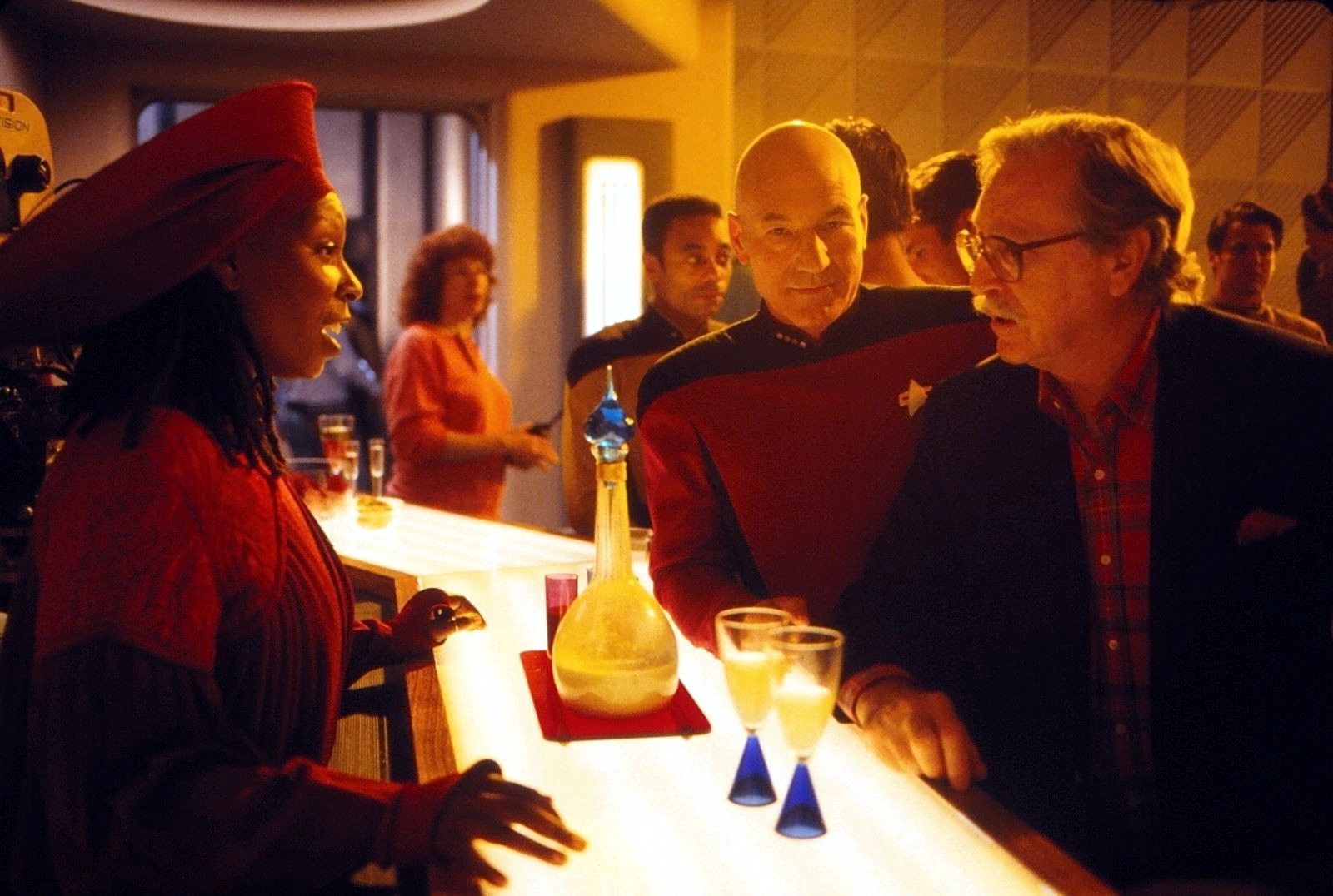 But with over 50-years of Star Trek-related content out there—behind-the-scenes books, autobiographies, documentaries, and podcasts—that’s a lot of facts to get under your belt.

If you’re ready to boldly go behind the scenes of Star Trek, but don’t know where to begin, here are a few recommendations.

The Making of Star Trek

The Making of Star Trek is the first officially licensed reference book on the subject of Star Trek and, boy-oh-boy, did they start things off with a bang!

Released in 1968, while the original series was still in production, The Making of Star Trek is the most comprehensive and entertaining behind-the-scenes book that covers how the original series was conceived, written, sold, and produced. There are interviews and memos detailing everything from costumes and production design to acting and budgets. It’s a whirlwind of interesting facts, funny stories, and on-set insights from the people who made it all happen.

Have you ever wondered how they came up with Spock’s name or why all Vulcans follow a similar naming format? Have you ever wondered how the sickbay evolved into being or how the Jefferies Tube got its name? If so, The Making of Star Trek is just the book for you. It’s not only a great Star Trek behind-the-scenes book, but it also inspired many of the show’s future creators—like Ronald D. Moore—to become television writers. It’s essential reading for any Star Trek fan.

The Fifty-Year Mission is a two-part, massive tome detailing every series and movie that is billed as, “The Complete, Uncensored, and Unauthorized Oral History of Star Trek.” And, I’ll give it one thing: it’s definitely a gloves-off, no-kids-allowed look at how Star Trek was made. While The Making of Star Trek is the greatest behind-the-scenes Star Trek book, The Fifty-Year Mission is the most sweeping and all-inclusive.

What I like most about The Fifty-Year Mission, is that it never shies away from giving credit where credit is due. Many people applaud Gene Rodenberry’s work on the original series throughout the book, but they also highlight that the series wouldn’t be half of what it is today without the work of Gene L. Coon. And some people go as far as saying Coon’s ideas had the most influence on the franchise.

Now, I’m not sure if I needed to know that Roddenberry had a fling with Nichelle Nichols or that he gave Majel Barrett a yeast infection after going from, as he said, “the back to the front” (yep, everything is aired out in this one); I’m not sure if I needed to know that Robert Beltran (Chakotay) started phoning it in during the filming of Voyager and that the writers wrote scenes about his weight gain to get back at him; and I’m not sure that I needed to know why they went ahead with that god-awful theme song for Enterprise. But I’ll tell you what, those things are woven into the fabric of Star Trek in a roundabout manner, and if you’re a completist in the same way I am, you’ll see their influence in a myriad of different ways on the series and movies.

In 1975, Leonard Nimoy famously wrote I Am Not Spock in an attempt to distance himself from the much-loved franchise character. He wanted people to see him as an actor first. While it’s a well-intentioned book, it backfired with fans when it was released because they felt like he was disowning and rejecting the character.

Jumpcut to 20-years later and Nimoy publishes I Am Spock, which focuses on the duality of the character and the actor. It’s a treat to see Nimoy’s perspective on the development of the character and show, to know what it was like for him behind the scenes (William Shatner liked to steal and hide his bicycle), and to learn how Nimoy embraced the identity of Spock.

If you’re going to dive into one of the original-cast autobiographies, I’d place this one on the top of that list.

While William Shatner’s Star Trek Memories and Star Trek Movie Memories may be remembered through rose-colored glasses, you can’t ignore what the man who played Captain Kirk has to say about the development of the show, his character, and the movies.

Shatner is a one-man production factory when it comes to Star Trek-related content. He’s written books, done the comic-con circuit, hosted TV specials, and made documentaries (which we will get to momentarily). If you’ve never dipped your toe into the larger world of Shatner, this is a good place to start.

If you want to learn about Star Trek during your daily commute or even while you’re washing the dishes, The Trek Files should be your jumping-off point.

In 20-minute segments, host Larry Nemecek explores memos and letters from the Rodenberry archive. These cover everything from the Enterprise Flight Manual (1978) to memos on Star Trek V: The Final Frontier to interviews with Star Trek writer Dorothy “D.C.” Fontana.

There are a lot of Star Trek podcasts out there, but they often get mired down by their self-serving love of the subject matter or their hot takes on the latest episode of Discovery. The Trek Files is the only podcast about sharing documents from the Rodenberry archive and showing us how and why they’re important in the wider context of Star Trek.

Alright, here’s where we start to separate the Ferengis from the Lurians (that’s a deep cut for you DS9 fans out there). The goal of Mission Log is to explore the Star Trek universe one episode at a time. They’ve already covered TOS, TAS, TNG, and now, as of the writing of this article at least, they’re 70 episodes into DS9.

Every episode of Mission Log kicks off with interesting facts, trivia, and tidbits, followed by a detailed recap of the story, and they finish it up by debating the morals, meanings, and messages of the episode itself and whether it still holds up.

Mind Meld: Secrets Behind the Voyage of a Lifetime

Mind Meld: Secrets Behind the Voyage of a Lifetime is labeled as a documentary, but it’s really a conversation between two old friends . . . who just happen to be William Shatner and Leonard Nimoy. They cover some intensely personal subject matter, and it makes you feel like you’re sitting at the next table eavesdropping on a conversation you shouldn’t hear—the death of Shatner’s wife, for instance, and how Nimoy helped him recover.

Unfortunately, Mind Meld is only available on DVD, but you can watch it in its entirety on YouTube.

Taking a cue from Mind Meld, The Captains takes the sit-down, heart-to-heart conversation idea and expands upon it. Shatner speaks with each of the series Captains to learn about their upbringing, their careers, their experience making Star Trek, and how it changed them.

Each episode is roughly 30-minutes in length, so it’s something nice to watch over dinner throughout the week, if that’s your sort of thing.

It’s no secret that the first season of The Next Generation is all over the place in terms of quality and story direction—everyone knows the show starts to get good once Riker gets the beard (or you do now, at least!)—but have you ever wondered why it’s so tumultuous?

Chaos on the Bridge is an appropriately titled documentary that focuses on the “chaos” behind the scenes during the development and production of the first season of TNG. There are lawyers involved, there’s a writer’s strike, and some of the stars don’t want to continue making the show due to the hectic atmosphere. The whole thing was a nightmare.

But we all know that the show recovered and went on to become a pop culture icon. Chaos on the Bridge shows you how they made it through that first season.

What We Left Behind: Looking Back at Deep Space Nine

Unlike the previously mentioned documentaries, What We Left Behind: Looking Back at Deep Space Nine takes a different track and focuses on what they were trying to accomplish, in terms of storytelling techniques and subject matter, with the series. Throughout the documentary, they make the argument that DS9 is the forerunner to the serialized television that we have today.

They also take the interesting route of showing how the writers would create and “break” a new episode of DS9 as if they were starting a new series off today. When writers “break” an episode, they figure out the overall story arch, plot points, and tone. This segment is interspersed periodically amongst the interviews with the cast, crew, and writers.

There are some cringe-worthy moments in What We Left Behind—the lounge act that starts it off is supposed to be charming, but it comes off as cheesy—but, all and all, it’s a fun and entertaining documentary about Star Trek’s dark horse.

Here are a few honorable mentions that didn’t make the cut:

Anthony Darnell is a writer and musician living in Seattle, WA. He’s the former Managing Artistic Director of The Satori Group (Stranger Genius Award nominee), but mostly kicks around town these days with his band Killer Workout, which was named after the 1987 horror movie of the same name. As a writer, Anthony received City Beat’s Critic’s Pick, a TAP Grant, the Cincinnati Enquirer Rising Star Acclaim Award, and was nominated for a Cincinnati Entertainment Award. He’s a self-proclaimed horror and sci-fi aficionado.

Anthony Darnell is a writer and musician living in Seattle, WA. He’s the former Managing Artistic Director of The Satori Group (Stranger Genius Award nominee), but mostly kicks around town these days with his band Killer Workout, which was named after the 1987 horror movie of the same name. As a writer, Anthony received City Beat’s Critic’s Pick, a TAP Grant, the Cincinnati Enquirer Rising Star Acclaim Award, and was nominated for a Cincinnati Entertainment Award. He’s a self-proclaimed horror and sci-fi aficionado.