I often wonder why the Venn diagram of war and horror films doesn’t overlap more. Death and the dark side of human nature prevail in both genres and the differences between them are often subtler than we give credit. This is particularly evident in war films that trade in gritty realism like 1917, which bears much resemblance in form and structure to a horror movie.

The dominant emotion that governs 1917 is fear and it does not let up for the entire two hours. Shot to appear as a single take, 1917’s narrative unfolds in real time so that the viewer is just as blind as the characters living through it. This makes you feel every single moment of danger that befalls Lance Corporals Blake and Schofield—and they are never not in danger. Whenever they stick their heads above the parapet or approach a door, you’re filled with that familiar urge to scream, “Don’t go in there!” because you know something awful must be waiting on the other side.

Gruesome death lurks around every corner and like horror movie protagonists, 1917’s leading men are given ample forewarning. Memento mori litter every scene in a fashion that would seem gratuitous were it not accurate to the historical record. Mangled bodies in various states of decay—both human and animal—are strewn across the muddy, desecrated landscape in nearly every shot and the characters are forced into intimate proximity with them, often against their wills.

This morbid scenery presents the perfect opportunity for that staple of horror, the jump scare, and director Sam Mendes is not above using it on multiple occasion. For example, early in the film as Blake and Schofield venture out into No Man’s Land, they seek cover by jumping blindly into a shell hole full of bodies. The camera then pans quickly to the left to reveal a man’s decomposing face jutting out from the mud, startling both them and us. It certainly isn’t the only grim surprise the two face over the course of their two-hour nightmare, nor is it the only time you, the viewer, feel that this is no ordinary war story.

Granted that in nearly every depiction of modern war, both fictional and real, fear plays an ever-present role. From the Somme to Saigon, soldiers recount without fail their inner terror as they march towards an inevitable confrontation with death. War movies don’t shy away from this truth. They almost always feature a scene where a trembling young man is petrified by fear or commits a craven act to extend his pitiful life a few extra moments. No secret is made that war scares even those with the strongest wills. But this is not the headspace where the typical war movie dwells. Fear is primarily used to established courage as the flagship virtue, not to terrify the viewer. This is where war movies make their most obvious diversion from horror.

Whereas characters in horror are often thrust into their struggle unwittingly and without a clear purpose beyond survival, most war movie heroes are bravely in pursuit of a noble goal that fits into some greater good. And while horror movie protagonists are not always exemplars of moral virtue, war heroes are typically motivated by a dutiful sense not just that evil must be vanquished but that good must triumph. This trope is most easily communicated in World War 2 films where Allied heroes square up against genocidal Nazis and the quasi-religious fanatics of Imperial Japan.

Even in more ambiguous wars, the Western protagonists are still positioned as the moral pillars opposite Vietcong Communists, Islamist terrorists, and other such nefarious forces. In these less black-and-white cases, the war itself may be portrayed as a giant mistake and the main characters may be stymied by ignorance, pride, and backstabbing within their own ranks but the enemy forces beyond the firing line are still portrayed as the greater evil.

1917 is not like this. It’s true that Blake and Schofield are tasked with a noble goal—stop a doomed British attack against a heavily fortified German frontline—but this goal exists inside the larger context of the First World War, a struggle without a clear purpose, where the average soldier’s sole task was simply to survive.

The causes of WWI are not easy to untangle by historians a century later, let alone by the men fighting it at the time and by the year 1917 there would have been no remaining good vs. evil paradigm left for the soldiers to take solace in. The Germans of that era were not proto-Nazi sadists despite the attempts of lazy films like 2017’s Wonder Woman to portray them as such—indeed, the concept of fascism didn’t even exist yet—and the British soldier stationed in France was not even defending his own soil from invasion. Instead, like his German counterpart across No Man’s Land, he was caught up in a nonsensical nightmare dreamed up by his imperialist overlords and made unending by the manufacturers of modern war machinery.

1917 does a fantastic job of portraying its antagonist as an intangible, superhuman force that none of the characters can truly understand or confront with any real hope of success. The most they can do is try to survive the madness and hopefully delay its onslaught momentarily. This harkens back to horror, where the evil actors are underpinned by motivations the average person cannot comprehend, from arcane metaphysics to alien evolutionary drives to psychotic aberrations in the human mind. It’s precisely the way in which we can’t make sense of these things that makes them scary.

None of the characters in 1917 can say for sure why their lives are at risk every moment but death lashes out at them nonetheless. The effect is an overbearing sense of dread. The universe is under no obligation to treat its subjects with mercy or decency and it hunts them relentlessly, offering only fleeting moments of quiet respite before plunging them back into the nightmare.

Insofar as the film has human antagonists, they’re mostly faceless and nameless. They emerge as though birthed from the wicked scenery to hunt Blake and Schofield. Indeed, the landscape itself seems pitched against them. The gaping maws of shell holes threaten to swallow them into the muddy depths, precarious tunnels foreshadow live burial, and burning cities evoke unsubtle images of Hell through which they must pass.

Often, the only option available to our heroes is to run from death’s relentless advance. Ineffective weaponry and the futility of offensive action is yet another trope imported from horror. Zombies and demons and superhuman serial killers cannot be dispatched by small arms fire. Neither do Blake and Schofield’s cumbersome, bolt-action rifles offer much in the way of protection. Weapons are eventually abandoned altogether in the interest of more efficient fleeing.

Even in its close, 1917 resembles horror, where happy endings are almost never delivered. It’s not a spoiler to note that the film’s finale is bittersweet at best. Armistice Day is still a year-and-a-half away for our heroes and whatever success they could hope to achieve within this short episode must be weighed against the slaughter, starvation, and devastation that continued until November 11, 1918. And, of course, anyone surviving the First World War had only to wait two short decades before plunging into its sequel, the deadliest war in human history.

All that said, there are still a number of elements in 1917 that differentiate it from a horror film. The carnage is not pornographic as in slasher or exploitation flicks. The soundtrack and sound effects are not employed ham-fistedly to dictate the viewer’s mood. And its terrors are unlikely to run wild in your imagination later on. There is zero chance you will wake up from a dead sleep wondering if a German infantryman is hiding under your bed and you will not mistake that bump in the night for shellfire.

Perhaps it’s a demerit to the human condition that such things don’t jolt us from our beds. Perhaps it’s a testament to the luxurious stability of this moment in time. Perhaps the horrors of war do not frighten us the way demons and ghouls and serial killers do because they are more familiar than we’d like to admit. That’s why it’s all the more noticeable how present fear is in 1917.

This is a terrifying film about a fragile civilization tearing itself to shreds, dragging its hard-won progress back into the primitive mud and gore from which it only recently emerged. It reveals the depths of human depravity in a way that the handsome uniforms and ornate architecture of its supposedly civilized setting cannot redeem, much as horror films explore the unplumbable darkness that lies just beneath the thin veneer of day-to-day existence.

When it’s over, you leave the theater trembling at the precariousness of human dignity. You walk to your car in a daze and drive home on the maintained roads of modern society, deferring to pedestrians in crosswalks and waving to strangers as they pass by in direct contrast to the indiscriminate slaughter you’ve just been witness too. Most of all, you ponder with sudden clarity how precious the invisible structure is that holds together the relative peace around you and how easy it would be to ruin, to transform into a nightmare whose haunting might last for countless generations. 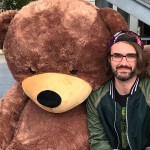 Jon Swihart is a musician and writer living in Seattle. He plays in the band Killer Workout, writes satire for The Hard Times, and maintains an unhealthy obsession with World War I.