When I was eleven or twelve years old, I found a copy of VideoHound’s Golden Movie Retriever 1997 at a yard sale. Updated every year, the VideoHound guide is a mammoth reference tome dedicated to steering film fans in the right direction at their local video store, or nowadays, more often than not, via streaming services. Though I’ve still got the old dog-eared ’97 edition collecting dust in my basement, I’ve had an itch for the last decade or so to pick up a new edition and check off all the flicks I’ve ever seen (or at least, all the ones that were listed).

Well, like so many of us with nothing but time on our hands these days, I figured what better time to pick up the 2020 VideoHound, now boasting over twenty-nine thousand feature titles, and start flipping through. A good week of painstaking check-marking later, I came up with a number just over Four thousand; that’s four thousand flicks I’d seen in my thirty-one years on this rock so far, not counting another three or four hundred that didn’t make the edition for editorial or binding purposes (Forty-two Scooby-Doo features on top of those covered, for example). But one thing kept irking me as I went through the Hound’s twelve hundred and forty-eight dictionary-sized pages of A-Z capsule reviews: I dig a lot of their zero-starred movies. More accurately, while they swap out stars for bones on their rating system, “WOOF!” is used in place of a zero, and unless I missed a few titles somewhere while double-checking my count, I’ve seen one hundred and thirty-eight zero-boned movies in this year’s VideoHound guide.

Now, obviously, the good folks at VideoHound have been sitting through thousands and thousands of movies for decades, with hundreds of new titles added every year for new editions, and they can’t all be winners. A lot of the schlock they’ve awarded “WOOF!’s” to probably deserve the dubious distinction—looking at you, Silent Hill: Revelation 3D—but the trouble with damning any particular title with a nothing-out-of-eight is that a lot of folks will just gloss over it, assuming there’s nothing to be derived but lost time. And some of the stuff here is just plain golden.

So here are a small handful of, as I see them, rather unfairly maligned horror flicks that made the Hound howl. I’ll provide short synopses while steering clear of too many spoilers, but please keep in mind that some of this stuff can be graphic, and potentially even upsetting at times. At the very least, most of these should be good for a few laughs, or to kill a couple of hours. And isn’t that what we all really need right now?

I discovered this one in the midst of a foolhardy and subsequently abandoned campaign through IMDb’s “Bottom 100” list, and it ended up being one of the few highlights of that doomed venture.

Adam West stars as a scenery-chewing cop in a small town with a history of baseball, kind-hearted muscle men and voodoo. It’s a trip; barely lit, weirdly framed, and drowsily performed from beginning to end. It also sports one of the most in-your-face heavy metal soundtracks of the eighties, firing up right out the gate with “Ace of Spades” by Mötorhead over an opening credits sequence that looks like it was edited together with the clock on a microwave.

If you find yourself bored—likely—you can try switching to the MST3k version, but the grand finale here is jaw-achingly hysterical either way.

I’d heard about this flick for years before I finally saw it a while back, and none of what I’d heard was very good. But this one seemed to hit me just right, and by the end of it my sides were sore and tears were still streaming down my face from all the loony Crypt Keeper giggling I’d been powerless to stop from snowballing.

The novel concept of cryogenic-freezing-gone-wrong-leading-to-frosty-faced-zombies-running-amok-in-a-freaky-sci-fi-laboratory could have gone a number of ways, and for the first little while, this one seems to be playing it serious to a fault. But after a few admittedly creepy minutes with an effectively doom-spelling score, the film devolves into a ceaseless free-for-all highlight reel for character actor extraordinaire Dan Haggerty (The demented Elves and totally unclassifiable Repo Jake) and the always-showing-up-in-something Linda Blair (The Exorcist and under seen Leslie Nielson Exorcist parody vehicle Repossessed).

There’s really not much more to say here: Blue-lipped dead guys crawl out of big freezer tubes and start tearing into more than capable performers who’d probably like to be elsewhere amidst a movie-length lightning storm. If that sounds like your thing, you could do far worse(The Rise of Skywalker, for instance).

Hoooo-boy; Doom Asylum. After a poorly staged car wreck and its confusing aftermath, an insane widower with a horrifically mangled face spends fifteen or twenty years lurking around an otherwise abandoned asylum, waiting patiently for unassuming morons to carve up.

I thought long and hard about including this one here, seeing as it’s both a subtle slasher satire and anything but subtle in its cartoonish ultraviolence, porn-caliber production values and weird, befuddling sexism. On the surface, it’s your standard setup, with a group of kids played by thirty-somethings matching wits with a loud, annoying girlrock band fronted by the most gung-ho actress in the world (Frankenhooker herself, Penthouse Pet of the Year 1987 Patty Mullen). But once the action gets going and you really slice into this thing, it’s a serious party.

Watch for the award worthy moment where one of the unfortunate victims-to-be walks into a football field length room and slowly approaches the mutilated killer for a full twenty seconds as he revs a buzzing surgical saw, then inches backwards and sits down comfortably in a chair for another half a minute so he can rip her face apart with less than minimal effort.

Easily the most chilling of this lot—including, ironically enough, The Chilling—this relatively obscure pseudo-slasher is probably best remembered for its sensational poster and cover art, but this one’s definitely worth seeing at least once.

A young, grieving woman, blaming herself for the loss of her infant via a tragic household accident, goes on a countryside excursion in the mountains with her friends for some peace and quiet. Things go bad when the unassuming city folk happen upon a puritanical couple (Yvonne De Carlo [Lily Munster] and Rod Steiger of The Amityville Horror and Carpool fame) and their three childlike adult offspring.

Unlike the other stuff on this list, I’d un-ironically call this a genuinely effective horror film, eschewing most of the onscreen gore typical of the eighties slasher craze for something just a bit more quieting. It still slots in nicely with the rest of these movies with its grim attempts at gallows humor and somewhat stagey performances, but if you’re feeling up for something that can really get under your skin by the end, there’s very little like American Gothic.

[P.S.: The Hound also shot down the glorious, glorious Infra-Man (1975) with a “WOOF!” so I’ve gotta put a good word in for that one. It’s not a horror flick by any stretch of the imagination, but it’s got more than enough monsters and super-kinetic visuals for ten of them, packed into a lightning-quick eighty-four minutes; spectacular.] 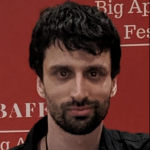