Where Have All The Movies Gone (On TV)?

I grew up watching movies any way I could find them—during the VHS boom on as well as on TV. There used to be so many movies on TV. And when I say “TV” I mean broadcast TV, not HBO or Cinemax, I mean over the air channels, the kind that needed extra tin foil for the antennae of your set. Sure, these days everyone streams whatever they want. While that, in theory, is a good thing, I feel it almost overwhelms you with choice. Think about it. How many times have you wasted more time scrolling through menu after menu than you did actually watching the movie you choose?

Hear me out. Sometimes being able to choose what you want to watch, when you want to watch it, narrows the parameters and you never venture out of your comfort zone. Would you be willing to blindly watch some old Italian western from the early 1970s  just because it was on? That is how I saw so many movies. I didn’t say “I want to watch this.” I just watched what was on. This approach broadened my cinema intake greatly. So let’s go to a time when having a VCR in the home was a luxury and late night and weekend afternoon movies on UHF stations were the place to see all kinds of oddball insanity.

A little history before we get too deep into this. When television first came onto the scene there were far too many hours to fill verses the number of programs there were. Then, Universal and other studios opened their film vaults and sold their movies to TV stations all over the US to fill those late-night hours (this is most famous as the Shock Theater package, but other studios followed suit and opened their vaults as well). All of a sudden if you missed seeing Dracula in the theater (either from not being born yet or maybe for other reasons), now it was on your TV, coming into your home for free. All you had to do was convince your mom to let you stay up late (the horror and sci-fi movies tended to be relegated to the late night hours or Saturday afternoons). This also brought us the first horror hosts: a nice jocular person that hangs out with you and watches the movie alongside you, even the bad movies and makes it all better.

The Shock Theater package was a huge success, and for a long, long time horror and sci-fi movies were a staple of not only prime time television but of “filler” (for lack of a better term) for independent stations who needed those afternoon and late night slots filled. Indy stations would make grand ratings on movies in the afternoons and overnights, with or without a host. Soon it became the norm.

Now, I am more or less focusing on the horror and sci-fi movies, but all kinds of films littered the wasteland that was 3:00 am local UHF television. Alongside the Hammer flicks and the Italian Star Wars and Alien knock offs, you had Westerns, Crime Stories, Love Stories, Murder Mysteries, Blacksploitation films and so on. Every genre was represented between 1:00 am and 6:00 am on a weekday.

Usually, the station would secure some kind of sponsor or ad buy (usually a local business like a “Insane Freddies World Of Hot Stereos” or “Jack Flacks Palace Of Slightly Scratched Records”), and that sponsor would pay for his ads to run in that slot regardless of what was playing there. Then the TV station would purchase a film package from a distributor. That purchase was always kind of a crapshoot, as most packagers wouldn’t just sell you the movies you want, you’d have to take everything. Say you wanted just the Hammer Dracula or A Fist Full of Dollars, well you also had to take Black Belt Jones, Monstroid, and some French love story that was poorly dubbed. Obviously you highlight the films you wanted, but what do you do with the others? Throw them on at 3:00 am and see what happens.

Well what happened was these films would get great ratings, and the TV station mucky mucks would be floored. How the hell can Soul Brothers of Kung Fu get a 3 share? Pretty soon the suit monkeys found that there was a huge audience late at night. Even with cable starting to penetrate into the people’s brains, local late-night TV had huge success.

This success was not only due to the fact it was free, but also because of an interesting thing the packagers did, which I am not sure was intentional. The local TV packagers had a completely different slate of movies than the cable TV packagers. A local TV station would have movies that would never show up on HBO, TNT, or A&E and that gave the locals a monster advantage. They used to promote the hell out of something like Horror Express or Them! coming “Thursday Night at 1:00 am”, and they would get an audience too. Hell, I first saw Them! at 1:00 am on a local UHF station. The promo came on during cartoons in the morning, and since it was a school night, I had to convince my dad to let me stay up until 3:00 am to watch it. I didn’t sleep much that night. I never regretted a thing.

Now, I will grant that some of the movies the locals got were originally hard R movies and were edited. But I will be honest with you; the local TV versions were smoother with the edits than AMC, FMC, TNT, or any of the cable networks. I saw dozens of Hammer films on local TV before I ever knew that these films originally had copious amounts of nudity. The same is true with some of the Italian movies. And the fact Italian films were dubbed meant you never noticed the replacement of the swears.

Then you would have the TV show “movies,” which were usually created when a TV series was popular but did not have enough episodes to syndicate (the rule of thumb was you needed a minimum of 100 episodes to be in second-run syndication, so a one- or two-season show would not have enough episodes). The studios would edit together two episodes of the show (most times using two-part episodes but not always) and rebrand it as a movie. Space 1999, Kolchak The Night Stalker, and Battlestar Galactica are three examples.

These movie versions were popular on the late-night local circuit, but they don’t normally show up on DVD releases so they are very rare interpretations.

Another great thing about these movies on local TV were the prints. They were damaged and washed out, and I, for one, loved that. I know, I know. Preferring the movies to be full frame, washed out, scratched, and mono seems odd, but go with me here for a moment. When you are watching Raiders of Atlantis or Jennifer The Snake Goddess—be honest now—doesn’t the movie just feel . . . I don’t know . . .  off, when you see them widescreen, remastered, in hi-fi and pristine? To me movies like these, even today, give off that 3:00 AM LOCAL TV vibe and for that, you need a mono, full frame, scratched, washed out print. No matter when or how I see Plan 9 From Outer Space, it always feels like 3:00 am on Halloween to me. Some movies just need to look like that.

The networks used to show movies all the time, too. Prime Time! NBC Sunday Night at the Movies! That kind of thing. I first saw Alligator, Battle Beyond the Stars, and other oddities in prime time on major networks. In the days before home video—and prior to cable being inexpensive enough for the masses—once a studio production left the theater it would show up on network TV and get huge ratings to boot. When Star Wars made it’s TV debut (a year before it would be available on home video) it was the definition of an event.

The networks don’t seem to show movies in prime time anymore. I used to work at a MyNetwork affiliate that still ran movies in the afternoons in the mid-2000s. When Halloween time came around, I would talk my way into using network time to host the movies. I hosted The Howling and Bram Stokers Dracula for two consecutive years.

Why don’t local channels do this anymore? One word (and made up word, too), INFOMERCIALS. Infomercials killed local television in more ways than one. After these blights on the TV landscape started to show up, TV programmers said “Why should we beg Sleazy Charlie for his business when we make more money and spend less time without even buying a movie?” That was it for us movie fans.

Infomercials were faster and more profitable for the stations, and those things spread faster than a virgin on prom night. Movies started to get phased out. Now, good luck finding the kinds of movies we loved on a local station (or even cable for that matter). Sure, stations still have some movies on the weekend afternoons, but showing Total Recall or Mission Impossible, or S.W.A.T is not the same as showing New Years Evil, or Alien Contamination, or Fighting Back. Maybe it’s just nostalgia, but I want these types of old and rare movies on local channels again.

Let’s also bring up our friends local the horror host. They are attempting to bring back this kind of TV on the net, and they deserve our total support. If you have a local horror host, watch their show. They are the very people that might fix this problem on local stations across the country.

Now, I can’t leave out basic cable. TNT, TBS, A&E, and any number of basic cable channels used to show movies as well. TBS used to have great crime thrillers in the afternoons; A&E used to show great “artsy” sci-fi late at night; TNT used to have a slew of movies they would show (not counting Monstervision which was even better and more targeted). Now all you see on these stations are reruns of TV shows. Endlessly. I saw Mazes & Monsters on TBS. I saw THX-1138 on A&E. I saw Atom Age Vampire on TNT, and I could list so many more like Phantom Of The Paradise, Screamers, Warriors Of The Wasteland, The Night Evelyn Came Out Of The Grave, and Eaten Alive. Now it’s just Law & Order and NCIS reruns . . . oh goody.

I saw so many great films late at night on some local station that I can’t even name them all. A good portion of those films are to not available on DVD to this day. In some cases they never even got a VHS release. I have long been on record saying I do not like streaming, and I will stand by that. I think a movie being a rare treat to watch instead of something to put on in the background has made me who I am. Movies have lost their value, but that is a tale for another time. 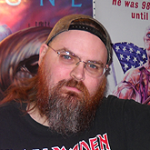 Josh Hadley is an analog warrior writing for the varied likes of Fangoria, Rue Morgue, Horrorhound, The Dark Side, Hustler, Delirium, Cashiers du Cinemart, and many others. He’s a veteran of low-budget television and film. Flying through the night with a VCR and the perspective of a Luddite, Hadley zigs while others zag and takes you along for the ride.

2 thoughts on “Where Have All The Movies Gone (On TV)?”