A Love Letter to John McClane 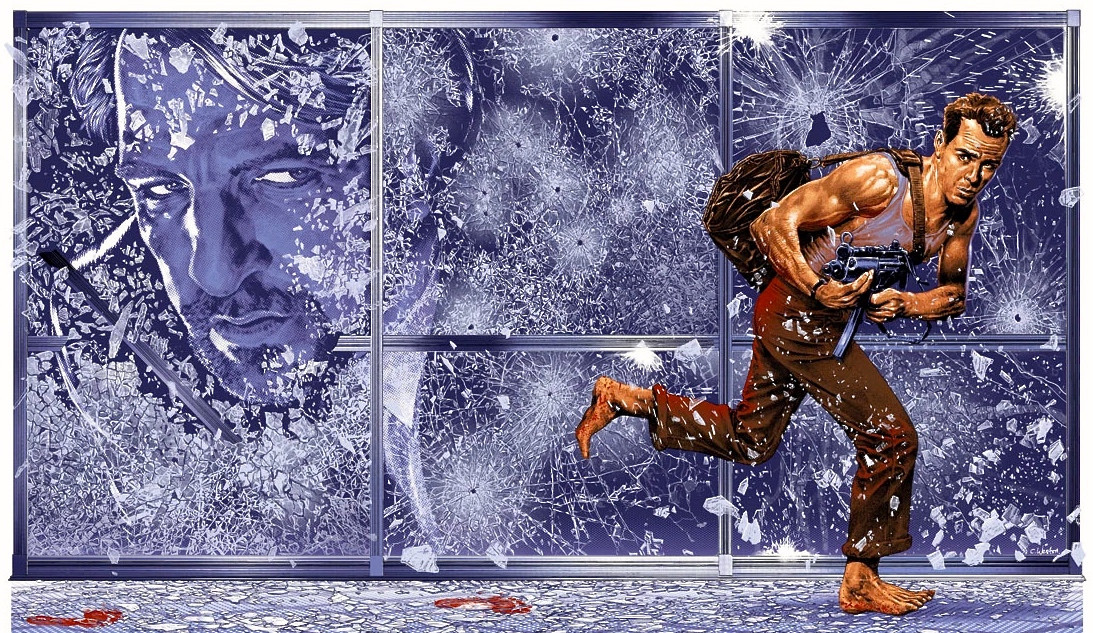 When a handsome fella like George Bailey learns his life has purpose, it gives me one helluva lady boner. Even when a cantankerous, money-pinching dude like Ebenezer Scrooge does an about-face, I wanna give him a big smack on the lips. And don’t get me started on Love Actually . . . it makes me ooze.

Look. I know. I’m a sucker. And I’m gross when I describe my anatomy. But I just can’t get enough of these Christmas-themed redemption stories. Forget Fifty Shades of Grey, there’s something about seeing a strong, unemotional man learning to love and be joyous again that sets my nether regions ON FIRE.

Now, there are some fool-minded folks out there who want to debate whether or not Die Hard is a Christmas movie. To those folks I say in an over-accentuated Southern Californian accent, “Hey babe, I negotiate million-dollar deals for breakfast. I think you know, in your heart-of-hearts, that Die Hard is actually a Christmas movie and you’re a piece of shit for even wanting to debate it. I’m tired of your brand of clickbait, you Eurotrash.”

Phew! Glad I got that outta the way. Seriously, I can’t roll my eyes hard enough at that argument. They’re just a bunch of miserable wimps who can’t handle guns, explosions, naked breasts, and quippy dialogue.

Ya know, the good stuff.

But back to you, John. There’s something about you that’s special. At a time in the 80s when muscle-flexin’ stars ruled the screen, you shattered our expectations with an action-packed Christmas movie. You had style, you had swag, and you had machismo, but you looked and acted like a regular guy. You were, dare I say, achievable . . . if you know what I mean, and I think you do.

(Side note to Joe Bob if he’s reading this: I don’t know how to stop stealing that joke. It’s too good. And don’t worry, you’re still my horror zaddy.)

So, John, if you and everyone else has forgotten why you’re the coolest cat in Nakatomi Plaza, let me give you a reminder.

Number One: You’ve got a way with words. Sure, Arnold’s got, “I’ll be back,” “Get to the chopper,” and “It’s not a tumor,” but I think Die Hard is the most quotable action movie of all time.

You’ve got Hans Gruber spouting off cool shit like, “Just another American who saw too many movies as a child.” You’ve got the guy from Family Matters saying, “If you are what I think you are, you know when to listen, when to shut up, and when to pray.” Even minor characters like Ellis deliver good one-liners saying things like, “Hans, bubby, I’m your white knight.” But let me just list out a few of your classics:

Number Two: You’re a good listener. When a strange businessman explains that the best way to survive air travel is to make fists with your toes on the carpet, you don’t bat an eye. You actually try it. And even when you’re locked in a fight for your life, you let Sgt. Al Powell get a gut-wrenching story off his chest.

Number Three: You’re inventive. Need to conceal a weapon? You strap it to your glistening muscles using Christmas tape. Looking to escape a flaming chopper that’s about to crash into the building? You jump off the side using a firehose to repel. Want to freak out your enemies? You send ‘em a dead body with “Now I have a machine gun. Ho-ho-ho” written on it. You’re quick on your feet, John, and I love it.

Number Four: You shoot a dude in the dick. FUCK YEAH. Shooting dudes in the dick is awesome.

Number Five: You’ve got a great team behind you. Die Hard is directed by John McTiernan. He’s the man behind Predator, The Hunt for Red October, Medicine Man, and Last Action Hero. Cinematography was handled by Jan de Bont whose career highlights include The Jewel of the Nile, Black Rain, and a turn in the director’s chair with the 1994 hit Speed. Music was composed by the legendary Michael Kamen. Now, you may not know his name, but you’ve definitely heard his work before; he composed scores for films like The Dead Zone, Lethal Weapon, Road House, Robin Hood: Prince of Thieves, and Mr. Holland’s Opus.

Number Six: You’re just trying to save your family. And this is why Die Hard is definitely and definitively a Christmas movie. The reason you flew from New York to Los Angeles, attended a Christmas party at Nakatomi Plaza, and stopped some German terrorists from robbing a vault and making minced meat out of hundreds of people is that you were just trying to patch things up with your estranged wife and two children.

You could’ve walked away. You could’ve called local law enforcement and let them handle it. You could’ve hunkered down somewhere and ridden the whole ordeal out in hiding. But no, you’re John-Fucking-McClane. You would do ANYTHING for your family. And when you and Holly (and Al) reunite at the end of the movie . . . ugh, it makes me melt. Play that scene, rip your shirt off, and I’m yours, John.

And there you have it: that’s why you’re the coolest cat in Nakatomi Plaza. I can’t wait to cuddle under a blanket with my man, drink a whiskey-infused hot cider, and watch Die Hard this Christmas Season.

Some people call it watchin’ a movie.

With love and kisses,

P.P.S. Oof. They fall off hard after that.

Eve loves cats and doesn’t want to know you.